The Naruto manga has to rank among the all-time longest-running and biggest anime franchises with 700 episodes and different sequel series. It was also created with several twists in the narrative, including time travel and some other revisions. Understandably, new audiences may be intimidated by it. While it is relatively easy to read an average manga, you have to pick up the first volume and read up with the successive volumes till the end, where you get the whole story.

However, it is safe to say that Naruto isn’t the average manga as it’s quite different to read from the rest. There’s the main series, and a spin-off series, multiple sequels, etc. So, it is quite a big read and can be confusing and intimidating as well. That’s why it seems right that you read the timeline for the Naruto series.

With a franchise as big as Naruto, keeping things straight is a little bit difficult. The anime titles on their own can confuse you not to talk about the series and storyline. Then Boruto came along, and everything became even harder to understand.

Whatever explanation is given for the timeline of Boruto, it has to involve the arcs in their chronological order. Starting this off will be the short story of Mitsuki Gaiden that seems to have a one-off novel adaptation that Masashi Kishimoto is okay with. This story details the past of Mitsuki and how his journey led him to join the Leaf Village.

After that comes the ‘Sumire’ arc, this arc and its saga are the very first that was aired in the Boruto series as it kickstarted the anime. With this arc, fans were introduced to and got an idea of who Boruto’s classmates were. This also added to teasing the mysterious talent that the hero’s bloodline has.

Things started to heat a little bit the moment that Sasuke showed up in this series. The next arc was the Naruto Gaiden arc, which adapted the fan-favorite novel and detailed the journey of Sarada as she walked up to Sasuke to confront him about her past. The Hidden Mist arc came next, and here there was a mission for Boruto’s class to go to the village to stop a coup from happening.  Another arc that we saw in the Boruto series is the New Team 7 arc. With this anime, fans are getting a look into the formation of the legacy team. At some point during this arc, the gang had to embark on a mission (which was their first). This arc was quite long, but the next few storylines came in with the other arcs, such as the Chunin Exams.

At the end of the story that the movie is centered on, the next arcs will be the manga’s central core. The Mujina Bandits were the primary focus of the seventh arc, and it was quite interesting as team 7 had a tough time dealing with them. After this came another extremist group.

This manga has a much bigger story of the strange powers of Boruto manifesting and finding purpose. The foundations of this were laid with the Kara arc.

Boruto: Naruto Next Generations comes as a sequel to this, and the setting follows on from many years after the events that happened in the initial Naruto story. So, it makes sense that it featured the children of most of Naruto’s key players, such as Hinata and Naruto himself. 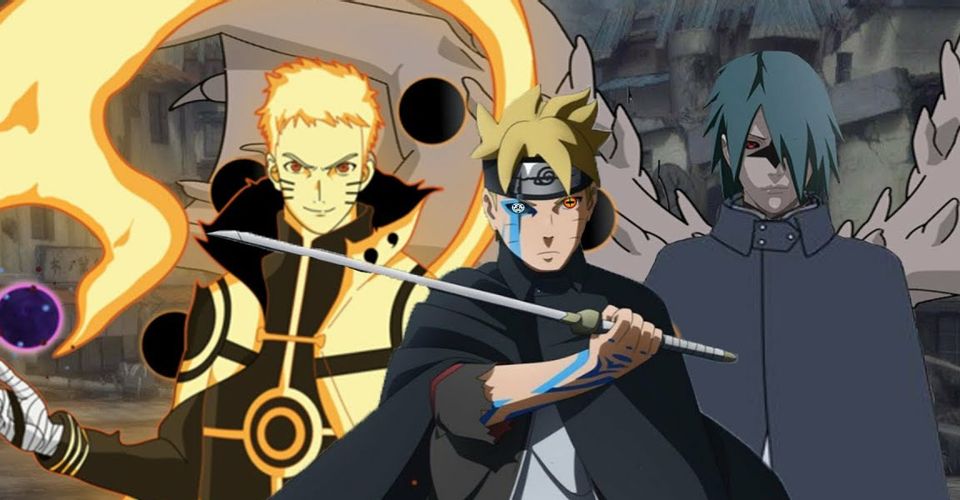 The central storyline from which Boruto came out is Naruto, and it is quite the story. This series has 700 chapters. Naruto, the major hero of the series, is at the center of events, with the series following the story of a young ninja who had a sealed demon in him and aspiring to lead his home village.

The storyline of Naruto shows a young man trying to navigate his way in a world predominantly based on controlling elemental abilities. This story is told long enough for fans of the series to grow and age alongside the anime series’ main character.

At some point, the show became split into two different storylines. The first storyline focused on Naruto at his young age going through his training as a ninja. While the second storyline, Naruto: Shippuden, is based on the exploits he did as a teenager. It is easier to think that breaking it down makes it easy to understand until you realize that between the two storylines, there are 720 episodes of the manga. Just so you get the idea of how large the scale is, Toonami, an anime block, started to air the 500 episodes of Naruto: Shippuden every week in 2014, and it will take them until 2024 before they get to wrap up the series. That’s how huge this series is. The only consolation that anyone can have is that the storyline is worth every bit of investment you can give.

Some background to the story

The Naruto series is set on a planet in which they have innate chakra powers from birth. There are five global powers in that world with other small countries. The elemental trait which people showed was used to name the countries. The five global powers, for instance, were named after the significant elements: Land of Water, Land of Fire, Land of Wind, Land of Lightning, and Land of Earth. These countries had their monarch who ruled them. The ninjas are the warriors that have learned to hone their powers and protect the country and the monarch. As stated in a review by buy assignment online, they maintain their armies by training some promising young ones in some small hidden villages which the big countries use as their academies. These young ninjas would be summoned frequently to carry out specific tasks with their powers, earn money to sustain the village, and build up their experience level.

This world is where a young orphan with tremendous powers and raw talent grows. He went from pulling pranks on teenagers for the fun of it to leaving the village for the ninja academy. The story of Naruto: Shippuden shows the growth of the young man, his relationships, the tragedies, etc.

Flann Ham is a professional journalist and content manager. He is also an avid anime/manga lover with ten years of experience watching and analyzing. Flann is available on Facebook and LinkedIn. He currently works at an essay writing service.

The Entire Naruto & Boruto team is amazing and I have watched both of the series as well as Manga and I love this series and can you share with us about the upcoming episodes of Boruto? It will be appriciated

One of the most popular anime of all time

naturally like your web site however you need to take a look at the spelling on several of your posts. A number of them are rife with spelling problems and I find it very bothersome to tell the truth on the other hand I will surely come again again.